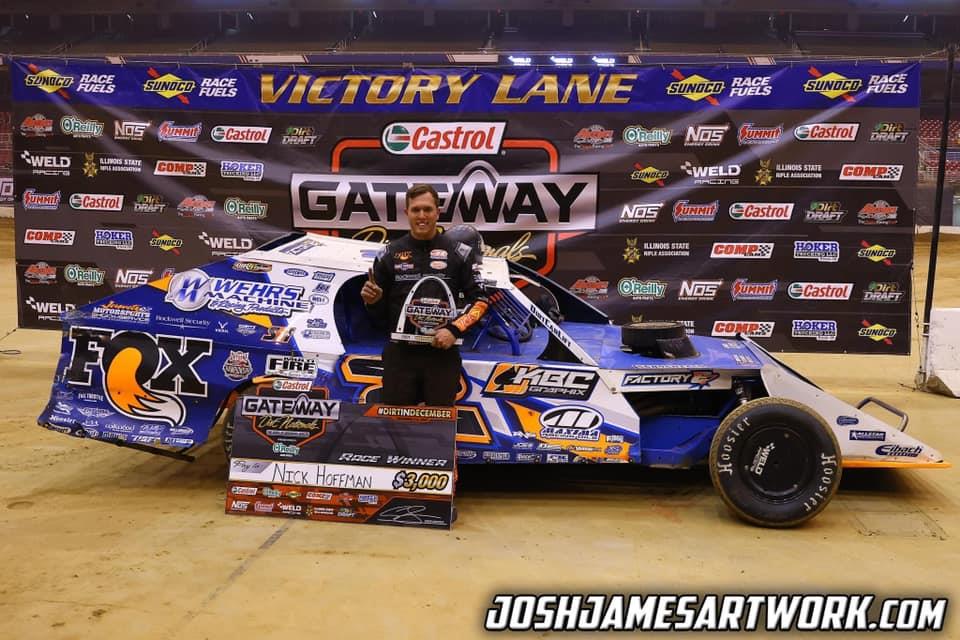 Nick Hoffman kicked off the 2021 Castrol Gateway Dirt Nationals presented by O'Reilly Auto Parts on Thursday night at the Dome at America's Center (St. Louis, Mo.). He entered both the Modified and Midget divisions at the unique, 1/5-mile oval.

In Modified action Nick hit the ground running by setting fast-time over the 27-car field in qualifying to earn the pole position for his heat race, which he won. Starting on the pole for the feature, Hoffman fought back the early-race challenges of his uncle Dean Hoffman before pulling away late in the race to register his 40th victory of the 2021 campaign.

In Midget action, Nick set second-fast time in qualifying over the 20-car field, which locked him into the pole position for his heat race. He picked up the heat win, which positioned him second on the starting grid for the 20-lap, $3,000-to-win prelim feature.

As the finale went green Nick jumped to the lead and paced first half of the race before Jonathan Beason rocketed to the lead. Hoffman battled Jake Neuman and Karter Sarff over the remainder of the event to register a hard-fought, runner-up finish behind Beason with Neuman, Sarff and Zach Daum rounding out the Top-5 finishers.

Action continued on Friday night with Nick competing in the Midget and the Scott Bloomquist Racing No. 0NH Super Late Model. Nick blazed to fast time honors in qualifying and then won his heat race for the second-straight night to earn a spot in the redraw. Drawing the third-starting spot for the feature via the redraw, Nick raced in the Top-5 throughout the finale before crossing the finish line in third behind Jonathan Beason and Zach Daum.

Forty-three Super Late Model entries entered Friday's $5,000-to-win program, and Hoffman qualified fifth fastest. However, bad luck would strike as the team discovered after qualifying that they needed to switch powerplants. After making an incredible engine swap before the heat race, Nick won his heat race from the second-starting spot, and then drew the third-starting spot for the 25-lap prelim. He would go on to finish second behind Myles Moos. The performance locked him into Saturday night's $30,000-to-win finale.

On Saturday evening Nick went into battle in all three divisions as the event drew to a close, and his finish would be the same across the board. Starting fourth on the grid for the $10,000-to-win Midget feature he ran as high as second before crossing the finish line in third behind Jonathan Beason and Chris Windom.

Meanwhile, in Modified competition he started fifth and raced to a third-place finish in the $10,000-to-win finale behind Tyler Peterson and Michael Ledford.

Last but not least he started third in the $30,000-to-win Super Late Model finale before registering a third-place finish behind Tyler Carpenter and Tanner English.